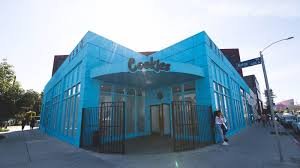 Sept. 17, 10:16 p.m.: The West Hollywood Sheriff’s Station reports that three men were arrested in the shooting and robbery incident at 8600 Melrose Ave. They have been identified as Talon Walker of, Phoenix, Ariz., Anthony Dayron Moore of Detroit, Mich., and Dontese Emanuel of Seattle, Wash.

There apparently was at least somewhat of a connection between the men arrested in the robbery and shooting incident at 8600 Melrose Ave. on Friday night and Cookies, the controversial cannabis shop seven blocks to the east. It is a connection that likely will increase the pressure to close Cookies and continue the debate about racism in West Hollywood.

Lt. William Moulder of the West Hollywood Sheriff’s Station has informed City Council members that the detective on the scene found bags and receipts from Cookies, receipts from sales about 30 minutes prior to the shooting incident. That incident occurred around 6 p.m. in front of the RtA Melrose clothing store. Two men were arrested for assault with a deadly weapon (firearm) and carrying a loaded weapon, one for false personation, and one for burglary.

Cookies sits just outside the West Hollywood city limits and is Los Angeles City Councilmember Paul Koretz’s district. Koretz has expressed concern about claims by nearby residents that customers of Cookies park illegally on Kings Road, where parking is reserved for residents, and make a lot of noise, with radios blasting and people shouting and laughing. They also have complained about customers of Cookies urinating and vomiting and throwing trash in their yards. And they have said that some Cookie’s customers and security guards weren’t wearing the mandated face coverings.

West Hollywood City Council members John Duran and Lauren Meister also have complained about the behavior of Cookies customers. At the West Hollywood West Residents Association City Council candidate forum on Sunday, Duran said he wanted to see Cookies closed. “We gotta get rid of these sort of neighborhood business that bring these sort of adverse impacts into our border and into our community,” he said.

In response to the complaints, Cookies has engaged a crew to clean litter off nearby streets for three to four blocks north and south of Melrose. Cookies also has increased the size of its security staff. Its manager said security staffers actively discourage people from parking on residential streets, instead steering them to Cookies’ parking lot and to space on Melrose Avenue. Cookies also has agreed to urge customers to order online for curbside pickups, which would reduce the number of customers coming into the store. And it has reduced its operating hours, which were from 8 a.m. to 10 p.m., to 9 a.m. to 9 p.m.

The City of West Hollywood has taken other steps to keep Cookies’ customers from parking on its streets. One of those is temporarily extending to 24 hours the period during which people must have a city permit to park as of Aug. 17 on the 500 block of Kings Road and on the 8300 block of Clinton Avenue and on the 500-600 block of Orlando Avenue south of Melrose.