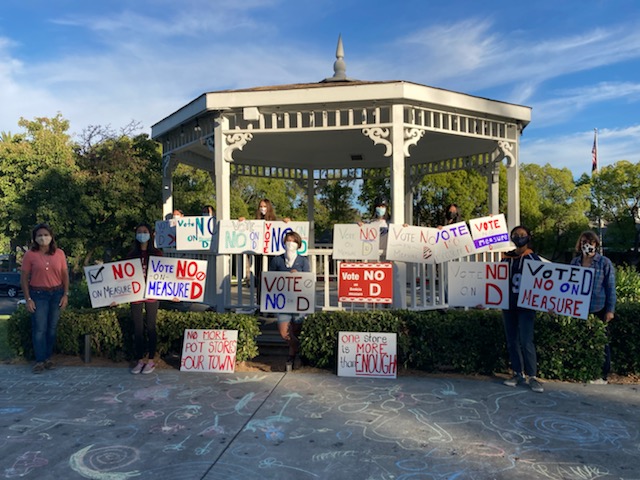 Benicia voters decide whether one marijuana dispensary is enough when they vote on Measure D on Election Day.

Meanwhile, it looks like Vallejo’s City Council will scrutinize whether to extend hours for already established marijuana dispensaries, putting it on the Nov. 10 agenda.

By voting “yes” on Measure D, voters open up as a a “non-biding, advisory question” for future discussion whether Benicia could or should have more than the one approved dispensary that’s expected to open by the end of this year.

A “no” vote opposes the opinion that new dispensaries should be permitted. Two of Benicia’s favored mayoral candidates — Christina Strawbridge and Steve Young — disagree on this issue with Strawbridge against the measure and Young for it.

Bart Bright, a no against “D” activist, said Monday he’s not against legal marijuana, but believes the city should “wait and see” the impact of the only approved dispensary.

“So many people think that if you don’t want as many (dispensaries) as possible or you want to have it limited, that you’re ‘reefer madness’ or some right-wing crazy religious nut,” Bright said. “The bottom line is, the one (approved) hasn’t opened yet. Let’s first see how it goes.”

In Vallejo, Councilmember Rozzana Verder-Aliga confirmed Monday that the plan “is to still have it (extending dispensary hours) on the Nov. 10 council agenda for ratification using the emergency provision based on economic needs/crisis due to COVID-19.”

City staff is “exploring and researching this emergency provision so it takes effect immediately instead of a code amendment, which will take longer and needs to go to planning commission and take months to get approval,” Verder-Aliga continued.

The council will vote on ratifying the emergency order “recommended by city manager hopefully by Nov. 10,” Verder-Aliga said, adding that “staffing changes” delayed a decision on the request to extend dispensary hours from 9 a.m. to 8 pm. to 6 a.m. to 10 p.m.

Verder-Aliga said the anticipated tax revenue increase for the city would be from $1 million to $1.5 million a year.

The hours increase is endorsed by fellow Councilmember Pippin Dew.

“I am supportive of bringing our guidelines and policies in the line with what the state will allow,” Dew said, hoping “it will boost our tax revenues.”

Scott Foster, owner of U.S. Bloom dispensary in Vallejo, said he started lobbying the council for extended hours in January.

By his own calculation, Foster believes extended hours for all of Vallejo’s 11 official dispensaries should generate conservatively $2.3 million a year more for the city.

“Let’s even cut that in half just to be ‘really fair’ — that’s $1.17 million left on the table every year just because they haven’t addressed what the state of California mandates,” Foster said.

Foster said he has an eye on Benicia’s Measure D because any dispensaries in nearby cities impact Vallejo.

“We could lose about 20 percent income to Vallejo tax base. That’s another reason to have extended hours in Vallejo. We need to try to keep that tax revenue for Vallejo,” Foster said. “We turn people away every morning and every night that try to get there before we close. If the shop is closed, they go to another town that has the correct state hours.”

For immediate coverage of the 2020 election — both local and — go to www.timesherald.com. Results and coverage can be found both Tuesday night and Wednesday morning.