Proposition 207 creates more far more issues than it solves, including higher taxes and restricting the free market for those wanting to open dispensaries 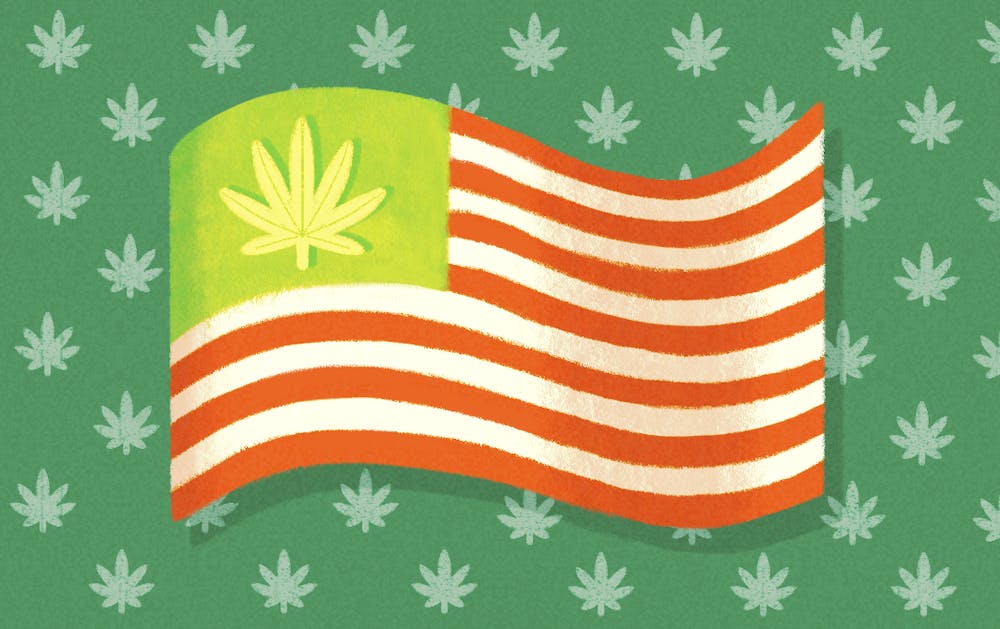 “This will be the second time Arizona will have voters decide on the legalization of marijuana with Prop 207 appearing on the general election ballot this November.” Illustration published on Sunday, Oct. 4, 2020.

I never thought I’d be against a pro-marijuana proposition — if it were up to me, all drugs would be decriminalized through proper legislation.

But the language in Proposition 207 creates more issues than it solves, such as monopolizing the marijuana industry, complicating DUI enforcement and providing more funding for the police.

Passing Proposition 207 will significantly restrict the free market to any individual that wishes to open up his or her own dispensary. It does this by limiting the number of recreational marijuana licenses to around the same number of existing medical marijuana dispensaries.

Additionally, the top five donors of Proposition 207’s campaign, who raised more than $3 million combined, are either dispensaries or financial benefactors of the marijuana industry. Besides an obvious vested self-interest, these marijuana insiders will benefit from Proposition 207 because it restricts the market to competition. This list also notably excludes any groups emphasizing criminal justice reform.

Proposition 207’s use of limited licensing will also allow the government to pick and choose which dispensaries can sell marijuana. This shuts the door to newcomer entrepreneurs, such as ASU students and small business owners interested in starting a dispensary.

Jeremiah Willett, an ASU alumnus who works on the opposition campaign to Proposition 207, said there is a way “you can be pro-recreational marijuana without being pro-Proposition 207.”

“There is a lot more beyond legalization in the initiative … It just seems like a proposition to protect the current industry and stakeholders in marijuana,” Willett said.

Beyond monopolization, opponents of the measure argue that passing it would increase DUIs, as it did in Colorado post-legalization, and make it more difficult to enforce marijuana-related DUIs. According to the Centers for Disease Control and Prevention, marijuana users were about 25% more likely to be involved in a crash than drivers with no evidence of marijuana use.

Proposition 207’s neglect toward details of road safety is what Willett said he opposes most. Marijuana DUIs are hard to enforce because there is no breathalyzer for marijuana, so police must use an observation of “impairment,” which can be attacked easily in court.

“I don’t think anything scares me more than a family member being hit by a driver that is driving under the influence of marijuana,” Willett said.

Besides dispensaries’ strong control over the marijuana market, Proposition 207 puts a 16% tax on all marijuana sales. ASU students are among the consumers who will have to pay increased prices for marijuana under this proposal.

Proposition 207 also proposes increased funding to the police. About one-third of the tax revenue will go toward funding the police.

Willett also noted the issue of attempting to amend the proposition if it were to pass, citing its need for a 75% majority in the Arizona legislature to pass amendments.

Given our current hyper-partisan political climate, as Willett put it, “We’re not going to get a 75% majority on anything.”

“Republicans and independents above 55 do not seem excited about this proposition at all,” Willett said. “Even people that smoke on a regular basis do not support this proposition. I’m pretty confident that it will fail.”

While a majority of older people do not react positively to Proposition 207, ASU students and younger voters could provide the strongest voice in swaying the vote to pass the initiative.

The most important point for students is that they make an informed vote, and there is something for everyone to oppose in Proposition 207.

Editor’s note: The opinions presented in this column are the author’s and do not imply any endorsement from The State Press or its editors.

Want to join the conversation? Send an email to [email protected] Keep letters under 500 words and be sure to include your university affiliation. Anonymity will not be granted.